BEING OVERTAKEN BY SELF-DRIVING LORRIES Realistic or pure science fiction?

Once you’ve read this article, you’ll know what the current situation is with regard to driverless lorries, what the expectations for the future are and how you can anticipate them.

There’s been a lot about it in the news lately: self-driving lorries. There is a lot of scepticism about this technology and I hear a lot from people, specialists in the field, who are convinced that it’ll never happen. I think that they have their heads in the sand, though, and I’m convinced that it’s just a question of time.

Think about an aeroplane. Most people board it quite happily even though it climbs, cruises and lands on automatic pilot. Of course, automatic driving has not reached the same level as a human at the wheel, yet, but it won’t be long before it not only matches the driver, but outperforms him or her.

According to a European study into road safety and accidents that Volvo trucks commissioned, as many as 90% of all accidents are caused directly or indirectly by human failure. And while the demand for safety is increasing, the number of accidents is also increasing, caused by, among other things, the use of smartphones while driving.

When lorries become driverless, the wage costs for those drivers – a very large proportion of transport costs – will also largely disappear. Transport prices will generally fall.

You will also be able to use your vehicles more frequently. A combination and driver for a normal load are usually still for as much as 60% of the time. Drivers have to sleep, of course, and driving hours legislation also has a significant effect. Driverless lorries, on the other hand, can keep going 24 hours a day and that means that you can get the same work done with about half of the combinations. Fewer lorries also means fewer traffic jams and less stress on the road network.

Research has been carried out: if semitrailers are self-driving and form trains, fuel consumption can be reduced by up to 10%. This was demonstrated by the European Truck Platooning Challenge, which was held last year in various countries including the Netherlands.

Driverless lorries are therefore, safer, cheaper and cleaner. The most important drive to make the switch, however, is the consumer. He or she will choose cheaper goods which can also be offered faster.

Development always takes a long time and a great deal has to be developed in the case of self-driving lorries, but a start has already been made. Tesla has developed a passenger vehicle which can, in principle, already drive itself. The company has already proven with autopilot 1.0 that their car can drive on the motorway in normal circumstances on automatic pilot. Autopilot 2.0 is now running which means that the B-roads are now also accessible. Tesla is currently testing how the driverless car performs in poor weather conditions.

Technical development is not the only thing that costs time, however. Several other things have to happen on paper as well before driverless driving is possible. Legislation and regulations are lagging behind at the moment, and driverless vehicles aren’t taken into account by insurance policies, for example.

Development 1: platooning
There are currently developments in the area of self-driving semitrailers and lorries as well. Mercedes Benz developed a driverless concept and a large number of truck manufacturers – including Scania, DAF, MAN, Iveco and Volvo – tested ‘platooning’ last year. The results were very promising. Platooning is when a train of lorries is formed with only a driver in the front one. The three or four combinations behind drive unmanned. You therefore only need one driver for several semitrailers. It’s expected that platooning will be the first development to reach the market and that it won’t take very long to do so either.  We will see the first trains on our motorways within five years.

Development 2: hubs
An intermediate form is that driverless lorries, singularly or in trains, will only drive between hubs. A hub is a central large car park right next to the motorway which serves as a junction. A lorry can self-drive between the various hubs and it is picked up by a local driver at the hub itself. This driver is then responsible for the last few kilometres.

Development 3: driverless lorries
The final step. Lorries which drive from location to location without the intervention of hubs or drivers. Techniques like automatic refuelling and automatic loading and unloading will be fully integrated. This development will take the longest but Mercedes Benz expects to put a driverless lorry on the market around 2025.

What does this mean for drivers?

The number of drivers needed is always subject to cyclical trends. Whereas a couple of years ago there was a lot of discussion about drivers from the former East Block depriving Dutch drivers of work, there is now a shortage again. A client of ours, the transport company Simon Loos, is an example of this. The business has even established a special programme to acquire 100 new drivers by means of retraining and reintegration.

Technology can help tackle the shortage. It is expected that drivers will still be needed for the next twenty years, though, even if it is only for loading and unloading and the paperwork, but even these tasks will become automatic in due course. I think that the occupation of driver will have died out in 25 years and that is something we need to start taking into account properly.

What does this mean for transport companies?

Whether they want to or not, transport companies will have to move with the times if they want to remain competitive. A transport company with well-trained drivers as its most important selling point will have to start looking for something else. The focus will then be more and more on the vehicle. You will need systems but not people. Extensive technical back-up and a service network will be required for those systems and  transport companies will also have to be much more 24 hour orientated. Indeed, it’s precisely at night that semitrailers will be able to cover a great many kilometres quickly and easily.
Furthermore, it’s a good idea to ask yourself where your clients are. Distance is becoming less and less of an issue. A driver has a ‘home base’, but that is much less applicable for a system, of course.
There’s going to be a shift in the market. Transportation is going to shift from a people business to a capital business.

What does this mean for warehouses?

Many logistic networks are based on a driving distance of one day. Warehouses are on average 600 to 800 kilometres from each other. This distance can easily be doubled soon. The number of warehouses will become smaller but the warehouses themselves will become larger. They will have to be designed to receive combinations without a driver, however. Important things to think about are: what are you going to do with the paperwork and loading and unloading?

And what does this mean technically?

Semitrailers will have to be fitted with platoon technology and later with technology that allows them to be self-driving. Cameras, sensors and software will be needed. It is also handy if tractor units have a large operating radius, with larger fuel tanks, for example, or greater fuel efficiency. The question is whether tractor units will still need a cab area. Seats and sleeping places will be superfluous. We will soon see a completely different kind of vehicle on the roads. Furthermore, localisation with GPS will become increasingly important. Without a driver, you will want to monitor your vehicle continuously. Semitrailers will also have to be suitable for automatic loading and unloading. There won’t be a driver to do that soon. We’re already building this technology in in the Axle-break Service.

How you can anticipate future developments now

It is far too soon to take concrete steps at the moment, but the time for the switch is approaching. Keep an eye on developments and be aware that driverless lorries is something that is going to affect you.

If you are a transporter: keep, in any case, an eye on the technology involved in platooning. This will probably be the first step.

For warehouse owners: start with the question, what is going to happen if there aren’t any drivers any more? Anticipating this can mean reserving space now for automated in and outbound. If you are going to be building a new warehouse, bear in mind that network distances are more likely to grow larger than smaller. It is important to ensure that there is the capacity to expand. Warehouses will become larger in the future.

This is a summary of how we see driverless lorries. If you have any questions or comments about this article or the automation of the in and outbound of warehouses, don’t hesitate to get in touch with us. 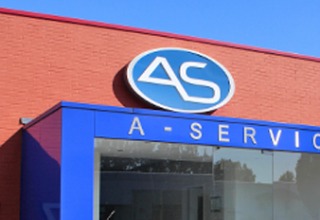 We design heavy-duty loading and unloading systems and believe total costs can be minimised by adopting a quality-based approach. Our employees are experienced craftsmen who are crazy about engineering. At our company work seasoned professionals when it comes to machines, software development, electro-engineering and metal processing.

“A-Service excels at converting clients’ traditionally-developed approaches into logical and cost-effective processes. They address problems at the source, examine them from every perspective and then develop innovative solutions based on refreshing insights.”